Five ways drones will change the way buildings are designed

Drones are already shaping the face of our cities – used for building planning, heritage, construction and safety enhancement. But, as studies by the UK’s Department of Transport have found, swathes of the public have a limited understanding of how drones might be practically applied.

It’s crucial that the ways drones are affecting our future are understood by the majority of people. As experts in design futures and mobility, we hope this short overview of five ways drones will affect building design offers some knowledge of how things are likely to change. 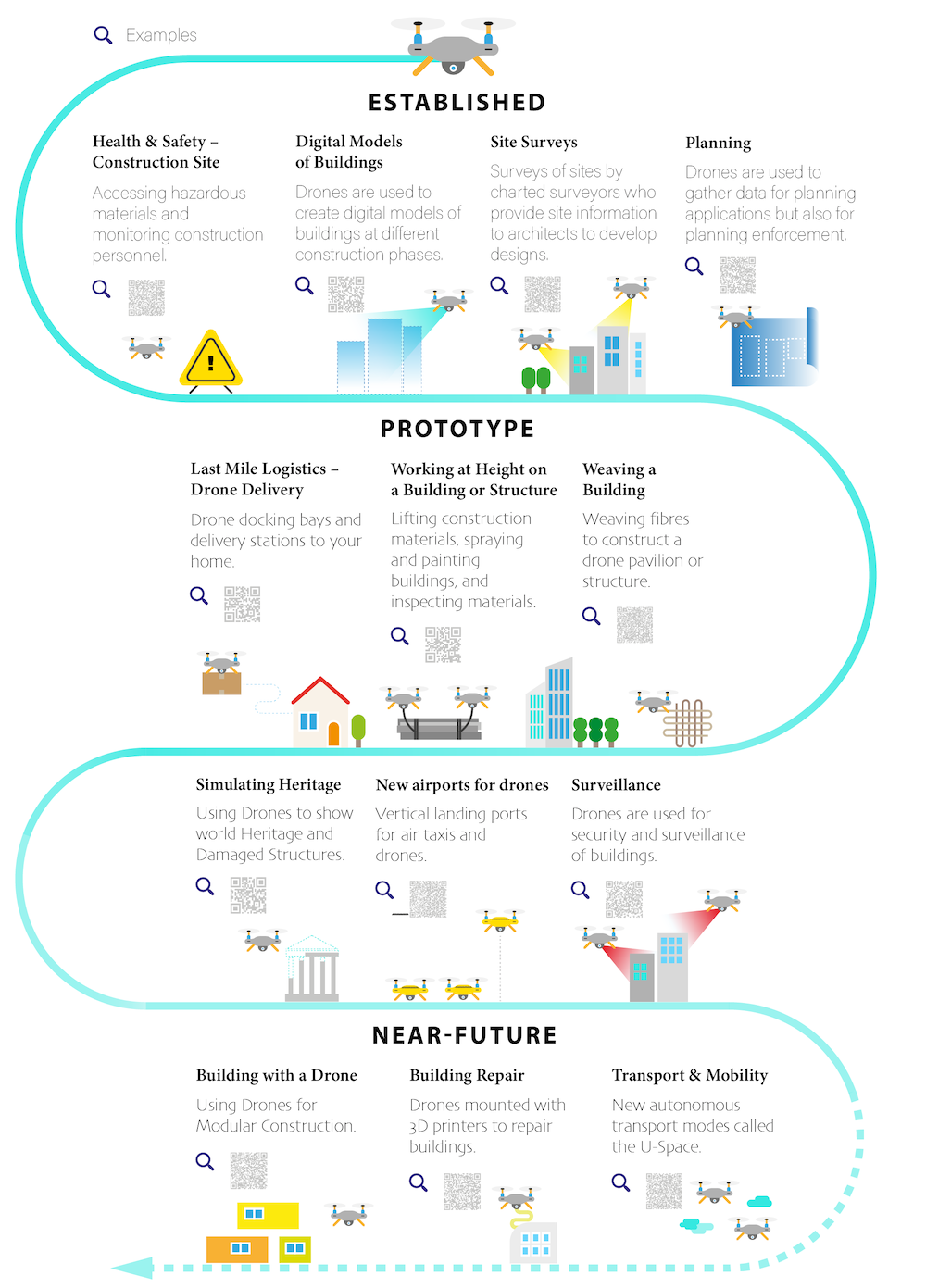 Drones can take photographs of buildings, which are then used to build 3D models of buildings in computer-aided design software.

These models have accuracy to within a centimetre, and can be combined with other data, such as 3D scans of interiors using drones or laser scanners, in order to provide a completely accurate picture of the structure for surveyors, architects and clients.

Using these digital models saves time and money in the construction process by providing a single source that architects and planners can view.

Studio Drift are a multidisciplinary team of Dutch artists who have used drones to construct images through theatrical outdoor drone performances at damaged national heritage sites such as the Notre Dame in Paris, Colosseum in Rome and Gaudí’s Sagrada Familia in Barcelona.

Drones could be used in the near-future in a similar way to help planners to visualise the final impact of restoration or construction work on a damaged or partially finished building.

The arrival of drone delivery services will see significant changes to buildings in our communities, which will need to provide for docking stations at community hubs, shops and pick-up points.

There are likely to be landing pads installed on the roofs of residential homes and dedicated drone-delivery hubs. Research has shown that drones can help with the last mile of any delivery in the UK, Germany, France and Italy.

Architects of the future will need to add these facilities into their building designs.

Wingcopter are one of many companies trialling delivery drones.

Two research projects from architecture, design, planning, and consulting firm Gensler and another from a consortium led by Imperial College London (comprising University College London, University of Bath, University of Pennsylvania, Queen Mary University of London, and Technical University of Munich) named Empa have been experimenting with drones with mounted 3D printers. These drones would work at speed to construct emergency shelters or repair buildings at significant heights, without the need for scaffolding, or in difficult to reach locations, providing safety benefits.

Gensler have already used drones for wind turbine repair and researchers at Imperial College are exploring bee-like drone swarms that work together to construct blueprints. The drones coordinate with each other to follow a pre-defined path in a project called Aerial Additive Manufacturing. For now, the work is merely a demonstration of the technology, and not working on a specific building.

In the future, drones with mounted 3D printers could help create highly customised buildings at speed, but how this could change the workforce and the potential consequences for manual labour jobs is yet to be understood.

Drones offer new possibilities for surveillance away from the static, fixed nature of current systems such as closed circuit television.

Drones with cameras and sensors relying on complex software systems such as biometric indicators and “face recognition” will probably be the next level of surveillance applied by governments and police forces, as well as providing security monitoring for homeowners. Drones would likely be fitted with monitoring devices, which could communicate with security or police forces.

Drones used in this way could help our buildings become more responsive to intrusions, and adaptable to changing climates. Drones may move parts of the building such as shade-creating devices, following the path of the sun to stop buildings overheating, for example.

Ole B. Jensen is Professor of Urban Theory and Urban Design at Aalborg University

This article was originally published on 1st December 2022 by The Conversation, an independent source of news and views, sourced from the academic and research community.

On February 9th we will be casting a spotlight over Northern Ireland, hosting our speakers discussions on how the latest digital innovations can help overcome the transport and mobility challenges faced by Belfast; Derry City and Strabane; Lisburn and Castlereagh; Antrim and Newtownabbey; Ards and North Down; Armagh City, Banbridge and Craigavon; Causeway Coast and Glens; Fermanagh and Omagh; Mid and East Antrim; Mid Ulster; Newry, Mourne and Down; and beyond.