Growing levels of greenhouse gases in the atmosphere have been directly linked to climate change and the warming of the planet in recent decades. On the other hand, increasing air pollution has become yet another global issue with severe consequences for the environment, health and quality of life. The main substances in air pollution are nitrogen dioxide and airborne particulates whilst the most worrisome greenhouse gas is carbon dioxide. Since the main substances of concern in these two problems are different, one might assume they are separate and unrelated, and need to be tackled in different ways. However, a closer look into their common substances, common contributory sources, common trends and their causal links based on data gathered over the last 60 years, shows a strong correlation between the two.

“Correlation does not imply causation” but can reveal a common cause.

While the Stratospheric ozone (aka the good ozone) protects life on earth by absorbing harmful ultraviolet radiation, the ground-level (Tropospheric) ozone is a harmful pollutant causing respiratory and pulmonary diseases in humans and damage to plants and crops in the environment. Low-level ozone is a secondary pollutant generated by photochemical reactions of nitrogen dioxide (NO2) and volatile organic compounds (VOCs) under ultraviolet rays. Human activities (transport, coal and gasoline burning, paints, solvents etc) have increased NO2 and VOC levels. Low-level ozone is a short-lived and local pollutant, yet it is a greenhouse gas and is associated with the warming of the Troposphere (EEA-2014). Moreover, studies have shown that the increase in global temperature will lead to warmer summer days and higher local ozone levels, known as high-ozone days [Archer et al., 2019].

The dimming effect may regionally decrease the temperature in affected areas by reducing the amount of sun energy reaching the earth’s surface and mask the global warming signs; however, since it increases the amount of atmospheric water vapour and warming at high atmospheric levels, at a global scale, it contributes to climate change [Stanhill, 2015]. Black carbon is a fine particulate matter (PM) generated by incomplete combustion of fossil fuels. Recent research conducted at Nagoya (Japan) and Cornell Universities [Matsui et al., 2018] has shown how black carbon Aerosols are able to absorb sunlight and contribute to warming of higher levels of the atmosphere; this is also known as global dimming.

Carbon Monoxide (CO) is a harmful air pollution gas formed by the combustion of fossil fuels. CO is not a major greenhouse gas, but it has an indirect effect on global warming. The reaction of carbon monoxide with hydroxyl radicals (OH) increases CO2 and decreases OH levels. This prevents OH from breaking down methane in the atmosphere; hence indirectly, contributing to greenhouse gas growth [Wolfe et al., 2019]. Carbon monoxide is also a precursor for tropospheric ozone. Nitrogen oxides (NOx), carbon monoxide and volatile organic compounds (VOCs) react under ultraviolet exposure and create tropospheric ozone.

In the UK, road transport is similarly responsible for more than 20% of both PM2.5/PM10 and 40% of NO2 pollution as well as over 20% of CO2 emission. Energy production is the second most similar source covering over 60% of CO2, 20% of Methane and 25% of NO2 emission.

“Before you tackle it, you must first measure it.”

Solutions and strategies put forward for controlling greenhouse gases can affect air pollutants and vice versa. Both problems are strongly correlated and need to be jointly tackled. Targeting common sources of air pollution and climate change, using particulates and NO2 source apportionment methods for carbon dioxide and methane is an example of an integrated strategy in addressing both issues [Heal et al., 2011].

With air quality a common global problem that is widely politicized and embedded in the social consciousness, governments, conservation agencies and the sensing industry alike must find cost effective solutions to measure at scale through high density deployments of air quality sensing solutions. Only then can the return on investment of policy and interventions to reduce air pollution as part of carbon reduction programmes be evidenced. 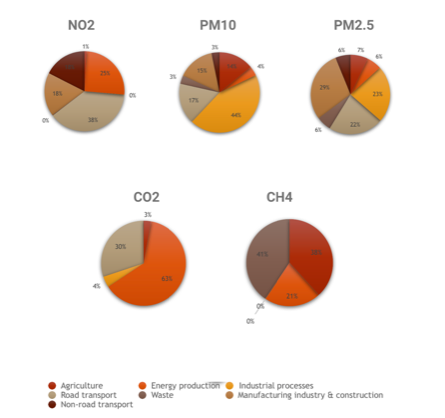 Monitoring wastewater levels in a wastewater network is imperative to enabling utilities to effectively manage their networks to prevent wastewater spills, reduce pollution and improve […]