This infographic shows the rise of electricity from wind and solar which, taken together, generate over a tenth of the world’s electricity and are now the fourth-largest source of electricity, behind coal, gas, and hydro: 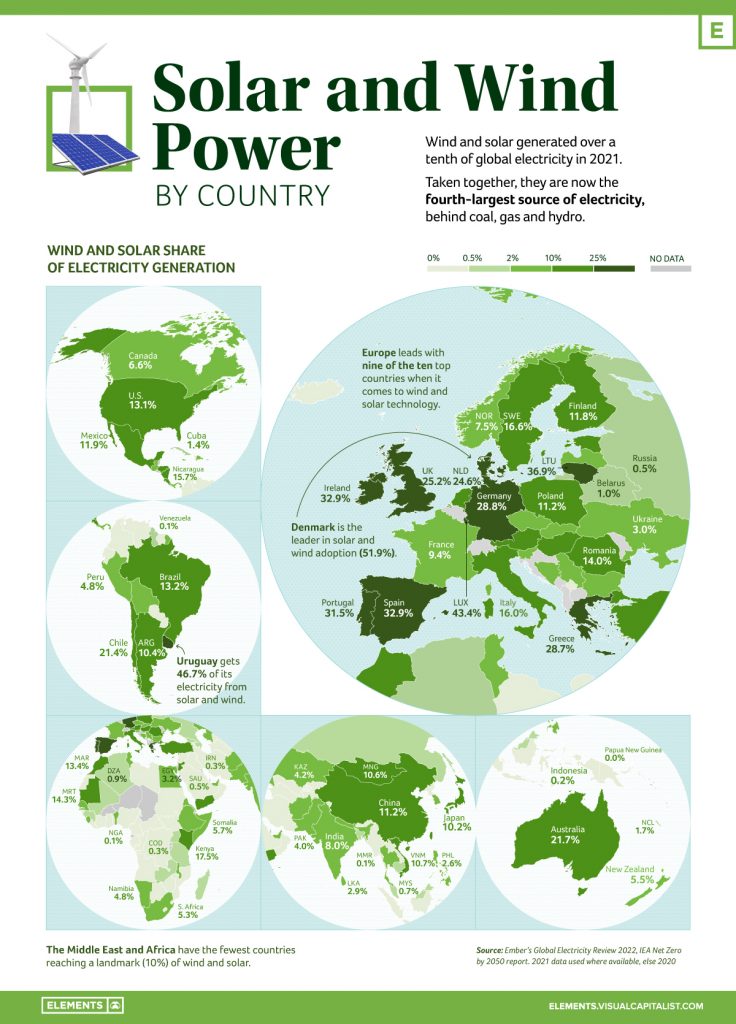 “From a regional perspective”, Visual Capitalist’s Bruno Venditti observes, “Europe leads with nine of the top 10 countries (Uruguay ranks 2nd). On the flipside, the Middle East and Africa have the fewest countries reaching the 10% threshold”.

On a positive note, Bruno concludes that “Even as emissions from the electricity sector are at an all-time high, there are signs that the global electricity transition is underway. Governments like the U.S., Germany, UK, and Canada are planning to increase their share of clean electricity within the next decade and a half. Investments are also coming from the private sector, with companies like Amazon and Apple extending their positions on renewable energy to become some of the biggest buyers overall. More wind and solar are being added to grids than ever, with renewables expected to provide the majority of clean electricity needed to phase out fossil fuels”.

Data Source: Based on data from Ember

Bikes, not self driving cars, are the technological gateway to urban progress

It took a whole lot of noise from activists and campaigners for bicycles to be taken seriously at last year’s COP26 summit in Glasgow, and for […]

Back on September 9th, we hosted TRANSPORT Smart Class, North of England 2022 at Chetham’s School of Music, Manchester. If you missed any of the subsequent […]