Smart Cities of the future: 7 things that successful cities do differently

There are 7 things that successful Smart Cities do differently according to IoT Analytics’ latest research. The 7 success factors include the empowerment of citizens, the facilitation of public-private collaboration, and alignment with government initiatives. Why does it matter? Approaches to Smart City differ tremendously, with some cities appearing to be more successful than others. This article from Fernando Brügge highlights numerous examples that cities or vendors should use as inspiration to re-examine their Smart City strategy.

What would you have thought if someone told you 20 years ago that the Smart City of the future would include talkative trash bins, streetlights that automatically “guide you home,” or hundreds of on-street parking spots across the city that come with an electric vehicle charging station?

As crazy as it would have sounded many years ago, Smart City technology is becoming part of our urban landscape. Cities like Prague, Manchester, or Melbourne use smart trash bins that notify (“talk to”) waste collection centers when they are full and ready for collection. Connected streetlights that automatically dim on and off according to actual lighting demands have become a reality in Miami, Edinburgh, and Jakarta. Citizens of Los Angeles, Hamburg, and Beijing can charge their electric vehicles while parked on the street.

Despite these advances, global Smart City development in 2021 is at an infant level, with billions of people living in urban areas not having access to many of these solutions. And cities are at significantly different stages of Smart City development. A previous IoT Analytics’ report observed that the number of deployed Smart City use cases varies significantly with some cities having deployed 30 of the 31 use cases while the global average of all surveyed cities is 16 use cases deployed per city (See The top 10 Smart City use cases that are being prioritized now and Smart City Use Cases & Technology Adoption Report 2020).

Several cities can be regarded as being at the forefront of the “Smart Cities of the future”, including Barcelona, Amsterdam, Singapore, New York, San Francisco, Dubai, Copenhagen, Seoul, Tokyo, and Adelaide (just to name some of the front-runners). Here are seven things we have observed in our research that, beyond implementing those 31 use cases, these successful smart cities prioritize – something other cities should also consider: 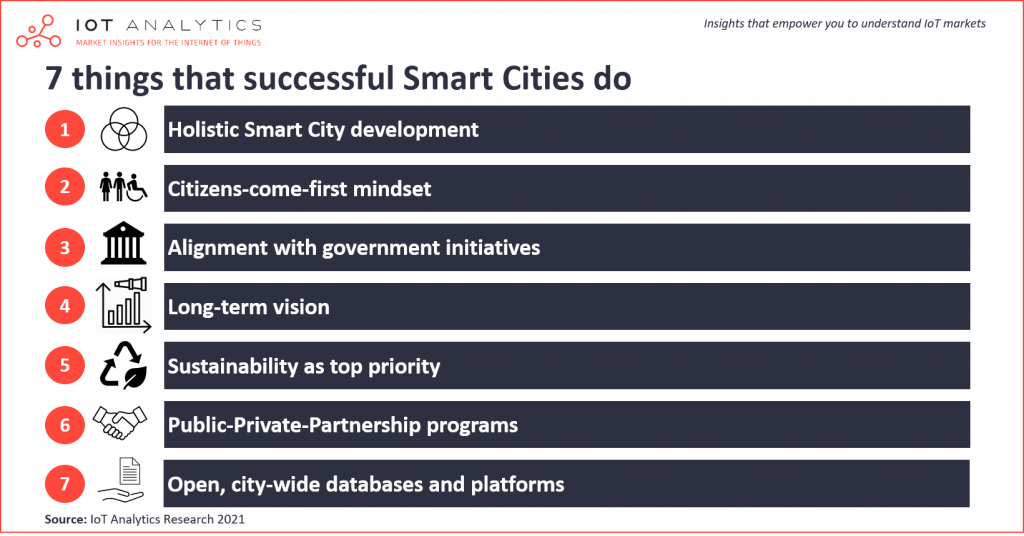 Successful Smart Cities tend to exhibit a holistic approach towards Smart City development, prioritizing the integration of (new and legacy) city applications and infrastructure under the same system to gain a complete view of the city. Holistic “Smart Cities of the future” initiatives focus on developing a common IT infrastructure and platforms that can be further leveraged by multiple Smart City applications. This contrasts with solely focusing on a particular application area (e.g. Mobility, Energy, Governance), where solutions tend to work in silos limiting the potential reusability of the deployed IT infrastructure for additional use cases. Typically, these holistic projects involve using a centralized management software (i.e. Smart City platform or operations center) for a complete view of the various Smart City applications.

Example: Back in 2010, the city of Rio de Janeiro introduced an Operations Center to improve the city’s resilience. The center monitors and controls the city’s daily operations, integrates several public entities involved in Rio’s routine and manages crisis and emergencies. Since its creation, Rio Operations Center has provided numerous benefits to city officials and citizens. The center helped the city to improve management efficiency in challenging areas such as transportation. Emergency response times were reduced by 30% due to the center’s ability to automatically identify traffic incidents and rapidly send field teams to the incident’s location. Rio Operations Center also played a key role in fighting the spread of dengue fever. Based on geographical analyses of cases, the city was able to identify the specific areas with the highest infection rates. This information was used to implement preventative measures.

Successful Smart Cities of the future exhibit a citizen-oriented approach by developing infrastructures that connect and enable citizens to become co-creators of their future city. They set up IoT Living Labs across the city where citizens, students, researchers, and businesses can create and test Smart City ideas and applications under real conditions. These urban labs typically consist of a specific area within the city that is either equipped with IoT capabilities (e.g. Amsterdam IoT Lab) or delimited for deploying and testing Smart City solutions at a small scale without any regulatory restriction (e.g. Copenhagen Street Lab).

Example: As of March 2017, 4,404 proposals have been voted on via the Seoul mVoting platform (88.3% of which were proposed by the citizens, while the remaining 11.7% by the officials), with 181 of them becoming Seoul’s Policy. Through mVoting, citizens have been able to participate in various city decisions, ranging from ordinary city life issues such as whether certain city parks should be designated non-smoking areas to major budgetary decisions such as where to destine a certain portion of the municipality’s annual budget.

Example: In 2014, Smart City initiatives in Singapore were included within the government’s Smart Nation program to create a digital economy, society, and government. To realize its nationwide Smart City project, Singapore’s government has adopted several measures harnessing innovation and research. These measures include, among many others, investments in research and development through agencies such as the National Research Foundation, the creation of test-bedding and trials (e.g. Juring Lake District), the co-funding of start-up accelerators, and regulatory reforms (e.g. FinTech Regulatory Sandbox).

Programs for Smart Cities of the future exhibit long-term character. Implementing specific Smart City solutions should not solely focus on addressing a particular goal (e.g. improving urban mobility) but should be geared towards realizing an overarching Smart City vision.

Within their Smart City program, successful Smart Cities prioritize the development of specific Smart City solutions that help them the most in improving environmental sustainability. IoT Analytics observes that all the top fastest-growing Smart City use cases have a direct impact in reducing cities’ carbon emission levels and improving the quality of life of their citizens. The list is led by EV Charging Management, followed by Shared Mobility, Air Quality/Pollution Monitoring, Connected Streetlights, Traffic Monitoring and Management.

Examples: Cities such as Barcelona and Amsterdam have invested in extending and managing the charging infrastructure for their e-bus fleet for their Smart Cities of the future. Similarly, Tokyo has invested in developing a low-carbon sharing mobility scheme to reduce its annual carbon emissions.

Cities typically rely either on public or private funding for realizing their Smart City projects. Yet these sources of capital tend to be difficult to secure given the presence of government budgetary constraints, along with the difficulty of demonstrating acceptable ROI for Smart City projects. To overcome funding-related limitations, successful Smart Cities tend to encourage and facilitate collaboration between the public and private sectors (i.e. Public-Private-Partnerships (PPPs)) in the development and implementation of Smart City projects. Compared to solely private or public funding, PPPs provide numerous benefits for Smart City projects. They enable a more balanced sharing of risk, costs, and benefits between the public and private sectors, reducing city budget pressure. PPPs further minimize projects’ dependence on municipal budgets or political leadership changes, thus providing long-term investment opportunities to support the planning and implementation of more extensive Smart City projects, among several other benefits.

Example: The city of Hangzhou in China provides an interesting example of a successful PPP, where an extensive collaboration between the local government, Alibaba, and 13 other companies has pushed forward Smart City development in the area.

Developing open, city-wide databases and platforms whereby various city-related datasets and platforms are freely available to the public constitutes another top priority in the agenda of Smart Cities of the future. Making city datasets freely available has been demonstrated to bring about many benefits for cities, including improving city services and government operations through citizen participation and the emergence of new data-driven business models. Additionally, open data initiatives are a crucial part of Smart City development since they stimulate innovation by enabling citizens and businesses to leverage key data for creating Smart City solutions.

Fernando Brügge is a research analyst based at IoT Analytics‘ Hamburg, Germany office. He covers diverse topics ranging from AI and IoT software to Smart City.

By integrating multiple travel modes and all different kinds of mobility service provider, MaaS is considered one of most important measures to foster modal shift […]

Last month, at TRANSPORT Smart Class, Scotland 2021, Graham Storrie highlighted both the macro and local drivers that are influencing transport strategy as we continue […]

On 24th February we will be casting a spotlight over Central England, hosting our speakers discussions on how the latest digital innovations can help overcome the transport and mobility challenges faced by the burgeoning city-regions of the West and East Midlands, and beyond. Join us at Nottingham Council House!