What are smart factories? 7 misconceptions and a definition!

Introduction – The smart factory as a competitive advantage

Moderna, the American biotechnology company and maker of the well-known Moderna vaccine, is the poster child of how a digital-first vision applied to a smart factory can be a business game-changer in 2021 and beyond.

In 2018, the company invested in a new 200,000-square-foot manufacturing site in Norwood, Massachusetts as part of its 10-year vision to “integrate automation and digital technology into everything we do.” The company equipped the factory with various state-of-the-art digital technologies that enabled end-to-end testing, developing, and scalable manufacturing capabilities for mRNA drug candidates. Some of the latest robotics, automation, AI, data analytics, and blockchain technology were deployed to create a digitally connected ecosystem or a “smart factory.” The goal was to be able to use the digitally advanced factory to scale up production quickly and with agility, according to the market need. 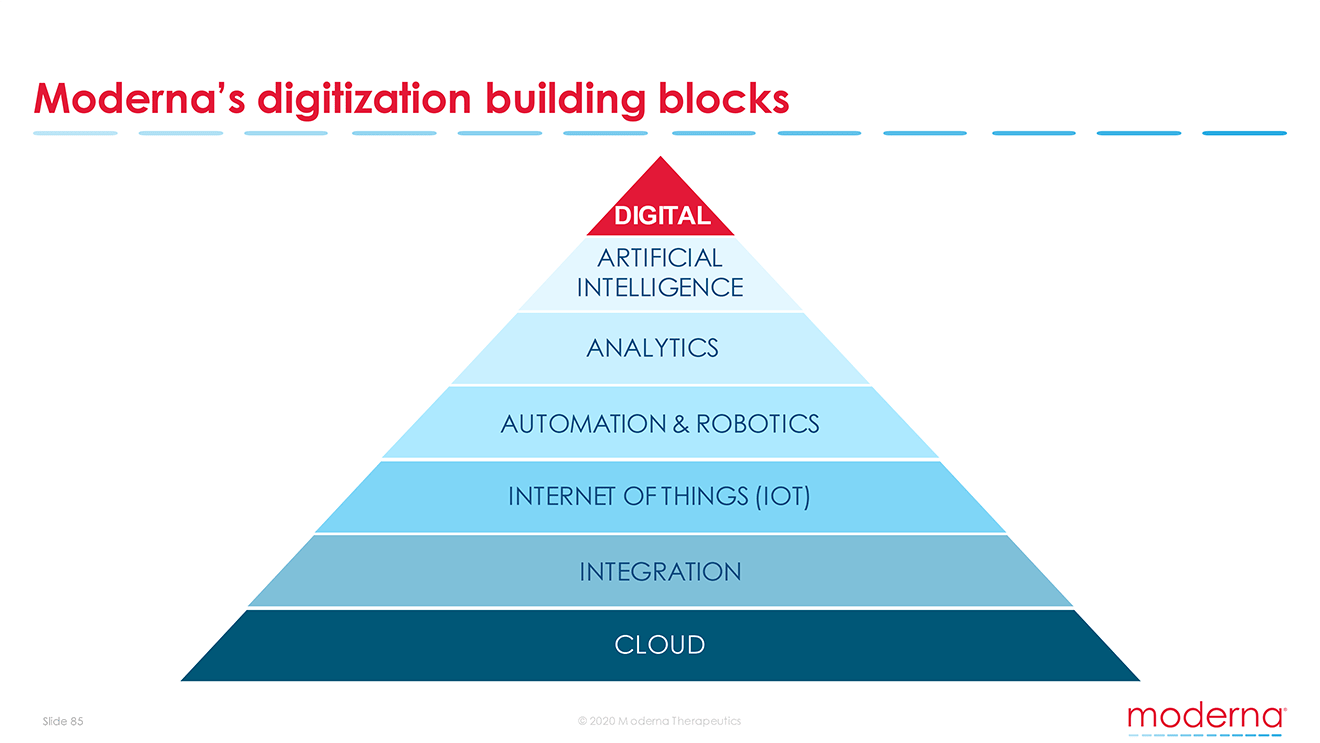 In 2020, Moderna’s smart factory was put to the test by the COVID-19 pandemic. In July 2020, the company became one of the first US companies to enter phase III of a clinical trial for a potential coronavirus vaccine, just months after the genetic code of the virus was released.

The smart factory became a cornerstone for Moderna to accelerate the vaccine development process in several ways, including using AI-based algorithms for massive sequence optimization and using digital twin technology to rapidly simulate and test the related production processes. This vaccine development process, which usually takes an average of 10 years, was reduced to months, in part thanks to Moderna’s previous investments in smart factory technologies. (Link)

Our latest research on smart factories shows that Moderna’s facility is a prime example of a new generation of factories that are more agile, sustainable, collaborative, and efficient than many of the factories that exist today. The 163-page Smart Factories Insights Report 2021 discovered 80 such factories, portrayed 10 of them in detail, and highlighted commonalities and best-practices. Our analysis of these also uncovered some common misconceptions about what it takes to realize a smart factory.

What a smart factory really is – a definition

Based on our research, a smart factory is “the holistic transformation of people, processes, and technologies along with the use of data to achieve the intended performance/business goals of one or more production site(s).”

It is important to understand that a smart factory is not a destination or an end goal, but a journey that all manufacturing organizations can embark on at their own pace. The “smartness” of a factory is measured on a spectrum. Factories of all shapes and sizes can assess their maturity and begin their journeys (e.g. by using digital maturity models, such as the Acatech model or Fraunhofer’s I4.0 assessment model, which are discussed in the report). According to our research, this amorphous nature of smart factories has led to the formation of seven common misconceptions, which are discussed below.

1. Smart factories must be started from scratch (greenfield projects).

WRONG. For sure, greenfield smart factory projects (i.e. new factories built from scratch) are easier to realize because there is no existing infrastructure to upgrade and no existing processes that could be disrupted, making planning and implementation much easier. Our research, however, shows that many existing (brownfield) facilities are also becoming smarter, in some cases with worldwide recognition.

Industrial automation vendors are at the forefront of showcasing how a brownfield smart factory transformation can be achieved. Here are two examples:

WRONG. It is true that IoT Analytics research from 2019 shows that big companies are further along and less budget-constrained, but there are ways that make realizing smart factories viable for smaller companies as well. Here are some examples:

3.      There is a one-size-fits-all blueprint for realizing a smart factory.

WRONG. Unfortunately, no two smart factories look exactly alike because each has different production characteristics, and, perhaps even more importantly, each has its own performance/business goals.

In our research, we identified eight typical performance/business goals, which we grouped into three types: operational, commercial, and R&D. The examples below highlight how different goals can lead to different types of smart factory deployments (in this case the Moderna plant has a different goal than the Trumpf factory). Examples:

WRONG. While new technology is often a key part of a smart factory transition, it is not the only part and, according to our research, not the most important one. Almost all smart factory practitioners that we have interviewed in the last two years have pointed us toward the importance of less tangible aspects, mostly related to people and processes within an organization. In fact, when asked about the success factors of Industry 4.0 initiatives, only one of the top 10 success factors revolved around technology.

One particularly important concept to consider is change management, which is required to ensure that the transformation process is transparent and that employees feel included throughout the process. Example:

Our research shows that Smart factory technologies play a vital part in automating aspects of data collection and analysis, and in eliminating inefficiencies and errors associated with manual processes, thereby improving the efficiency of the continuous improvement process.

6.      Scaling the successes at one factory to other factories in the network is easy.

WRONG. Scaling from one smart factory to several others is often the most difficult part because each factory setup is inevitably different from the predecessors, with both the tangible (machine conditions, IT landscape, product features) and intangible conditions (employee mindset, management mindset) being entirely different in different locations.

The journey of a smart factory often begins with a single digital use case and quickly grows into a mesh of technologies and use cases. Approaches on how to navigate the strategic decisions around scaling a smart factory approach vary.

Some companies find that it is easier to first try out some of the technologies and use cases in an existing factory before building a new smart factory from scratch (greenfield). Example

Other companies have employed the opposite approach. Rather than building a new smart factory based on best practices from an existing plant, they build a new flagship plant and use it as the central element in their smart manufacturing network strategy. Example:

According to our research, data, not automation, is the key foundation underpinning all smart factory use cases. Technology that enables the acquisition, orchestration, and analysis of relevant data will empower the humans running the factory to make faster, more informed, and ultimately better decisions. Example:

Hugo Boss. Apparel manufacturing is considered one of the most labor-intensive industries. Hugo Boss’s apparel manufacturing smart factory in Izmir, Turkey, has implemented technologies such as augmented reality, machine learning, cloud computing, and data analytics alongside its 3,500 workers to produce suits, jackets, shirts, and coats. The factory improves efficiency by using more than 1,600 Wi-Fi-enabled tablets to capture data and empower front-line employees with order and operational data. (Link)

As the example of the Moderna smart factory has shown, investing in production technology, personnel, and processes can pay enormous dividends. Today’s generation of smart factories is not necessarily characterized by heavily high-tech greenfield installation. Due to the rapid change in customer preferences and the availability of promising technologies, companies of all shapes and sizes can (and should) have a comprehensive smart factory strategy in 2021—regardless of their current digital maturity. The messaging is clear: Companies that have already embarked on their smart factory journey will continue to adapt better to the dynamic business environment and grow faster than those that have not.

Here are three action points that, based on our research, have worked for several manufacturers to start their smart factory journey:

Interested in learning more about Smart Factories? The Smart Factory Insights Report 2021 is a comprehensive 163-page report detailing how factories are becoming smarter. It includes 10 detailed case studies of smart factories showcasing goals achieved, technologies deployed, and use cases realized. There is also in-depth analysis of the 3 smart factory enablers processes, people, and technology as well as a database of 80 smart factory projects around the world. It is part of IoT Analytics’ ongoing coverage of Industrial IoT and Industry 4.0 topics (Industrial IoT Research Workstream).

Monitoring wastewater levels in a wastewater network is imperative to enabling utilities to effectively manage their networks to prevent wastewater spills, reduce pollution and improve […]

‘Dark data’ is killing the planet – we need digital decarbonisation

More than half of the digital data firms generate is collected, processed and stored for single-use purposes. Often, it is never re-used. This could be your […]

On December 7th we will be casting a spotlight over Scotland, hosting our speakers discussions on how the latest digital innovations can help overcome the transport and mobility challenges faced by the city-regions of Glasgow & Clyde Valley, Edinburgh & South East Scotland, Stirling, Tay, Aberdeen, Inverness & Highlands, and beyond.