An army of sewer robots could keep our pipes clean, but they’ll need to learn to communicate

Hidden from sight, under the UK’s roads, buildings and parks, lies about one million kilometres of pipes. Maintaining and repairing these pipes require about 1.5 million road excavations a year, which causes either full or partial road closures. These works are noisy, dirty and cause a lot of inconvenience. They also cost around £5.5 billion a year.

It doesn’t have to be this way. Research teams like mine are working on a way of reducing the time and money that goes into maintaining pipes, by developing infrastructure robots.

In the future, these robots will work around and for us to repair our roads, inspect our water and sewer pipes, maintain our lamp posts, survey our bridges and look after other important infrastructure. They will be able to go to places difficult or dangerous for humans, such as sewer pipes full of noxious gases.

We are developing small robots to work in underground pipe networks, in both clean water and sewers. They will inspect them for leakages and blockages, map where the pipes are and monitor their condition for any signs of trouble. But what happens when the robots need to go to places where our existing wireless communications cannot reach them? If we cannot communicate with them, we cannot stay in control.

Pipebots is a large UK government-funded project working on robots that will help maintain the pipe system. These robots will come in different sizes, depending on the pipes they are in. For example, the smallest ones will have to fit in a cube with a side of 2.5cm (1 inch), while the largest ones will be as long as 50cm.

They will operate autonomously, thanks to the array of sensors on board. The robots will use computer vision and a combination of an accelerometer, a gyroscope and a magnetic field sensor to detect where they are. They will have ultrasound and infrared distance sensors to help them navigate the pipes. Finally, they will also have acoustic and ultrasound sensors to detect cracks in water pipes, blockages in sewer pipes, and to measure the overall condition of these pipes.

The information gathered this way will be sent to the water companies responsible for the pipes. In the first instance, the robots will just monitor the pipes and call in a separate repair team when necessary.

One of the biggest challenges will be making them communicate with each other through the pipes. This requires a wireless communications network that can function in a variety of conditions since the pipes might be empty, full of water or sewage, or somewhere in between. The three main options we are exploring are radio waves, sound waves and light. 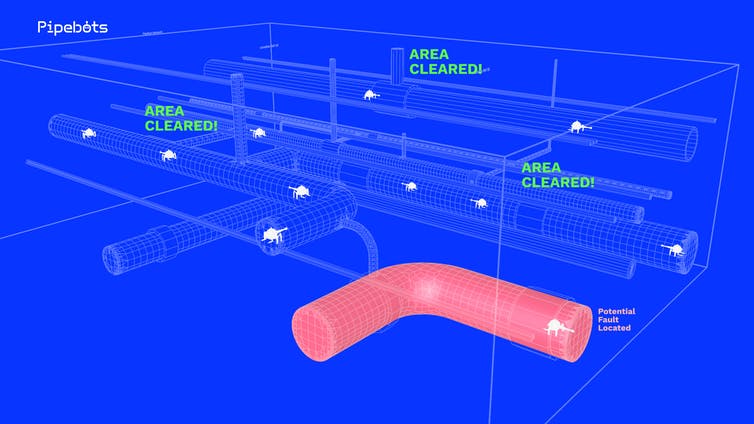 The robots will have acoustic and ultrasound sensors to detect cracks in water pipes (Human Studio, Author provided)

Wireless communication technology using radio waves is everywhere these days – wifi, Bluetooth, and of course, mobile phones networks such as 4G. Each of these work at a different frequency and have different bandwidths.

Unfortunately, none of these signals can go through soil and earth, we are all too familiar with how mobile phone connection drops when a train goes through a tunnel. However, if we had a base station already within the tunnel, it would allow radio waves to travel along its length.

Thankfully, sewer pipes look a lot like tunnels to radio waves – at least when they’re relatively empty. We are adapting technology similar to wifi and Bluetooth to make sure the sewer inspecting Pipebots always have a connection to the control centre.

Water blocks radio waves even more than soil and earth. In fact, at high enough frequencies, it acts as a mirror. So to stay in control of the robots in our water pipes, we have to use both sound and light. 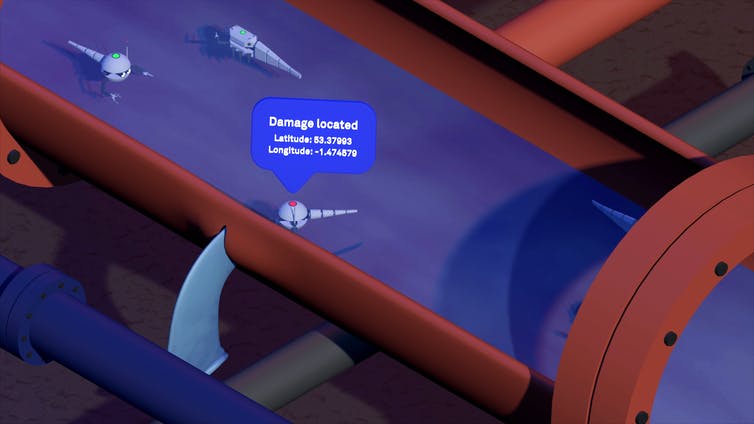 They will have ultrasound and infrared distance sensors to help them navigate the pipes (Human Studio, Author provided)

Wireless communication methods using sound and light are not widely commercially available yet. But they are making waves in the research community.

One method, visible light communication (VLC), uses transmitters and receivers, such as LEDs, that are small and energy efficient, and also provide dazzling data rates, on the order of tens of gigabits per second. However, because light travels in a straight line, VLC can only be used when robots close to each other need to communicate. One potential solution is to have many robots in the same pipe, forming a daisy chain along which information can travel around bends in pipes.

Sound, on the other hand, can travel for miles along pipes and will travel around corners with ease. The downside is speakers and microphones can be power hungry, and sound does not offer particularly high data rates. Instead of the several billion bits per second that can be sent using 5G and post-5G technology, sound waves can only carry a few bits per second. While this will be enough to know if a particular robot is still functioning, it will not be enough to relay a lot of useful information about the pipes.

It won’t be a case of picking either radio, sound or light waves. The wireless communication network we are developing for our subterranean little helpers will use a combination of these methods. This will ensure the robots do what they are supposed to do, that we stay in control of them, and they deliver on their promise.

We hope to have a full Pipebots system demonstrated in a realistic network by 2024. Once that is successful, we’ll need to go through a thorough certification and compliance process to ensure that Pipebots will be safe to deploy in live water and sewer networks.

Viktor Doychinov is a Research Fellow in the School of Electronic and Electrical Engineering, University of Leeds

This article was originally published by The Conversation, an independent source of news and views, sourced from the academic and research community.

The city of Bristol has long been synonymous with innovation: whether it’s Brunel, the aviation industry or Aardman studios; it’s always been a place of […]

With Climate Change making flood issues across the country even more severe, and an increased number of funding opportunities from different sources, it is the […]