Last year, BP, set course on a journey towards reaching net zero carbon and announcing itself as an integrated energy company. BP’s announcement sets goals for reaching net zero across its operations and also reaching a 50% cut in the carbon intensity of products BP sells by 2050 or sooner. Blackrock’s CEO Larry Fink announced last year that it was also moving away from coal, making it one of the largest divestments globally from heavily carbonized industries. The group is one of the world’s largest investors in coal, oil and gas, as well as projects leading to deforestation in general. Such news is becoming increasingly regular and common. There are not many companies in the developed world whose business model would not be profoundly affected by the transition to a net zero position – meaning one that emits no more carbon dioxide than it removes from the atmosphere by 2050.

Companies need to ramp up their efforts towards this transition with a well-articulated and thought out long-term energy strategy to meet national and international climate and energy targets, including the Paris Agreement. By 2050, the renewable energy share in electricity generation is expected to reach 86% (IRENA, 2019), which is a percentage that would support having an economy that is based on net zero carbon by 2050.

The Energy Transition – Evolution or Revolution?

The common belief that industries evolve as per Moore’s law no longer holds true in contemporary times. Technology is advancing exponentially which is revolutionizing industries. Industry 4.0 rapid advances in artificial intelligence, big data, the Internet of Things (IoT), robots, autonomous vehicles, biotechnology, nanotechnology, and quantum computing are driving end-to-end efficiencies along the energy value chain, which is transforming the entire energy industry.

The average growth rate of demand is expected to decrease by the year 2030. This would be due to energy-efficiency improvements and digitalization that is accelerating growth in the renewables sector. With the widespread use of smart homes (for example powered by Alexa and similar devices that switch on lights based on commands and control all appliances in the house, IoT sensors, and aware electricity users) consumers have the right controls and can conserve power consumption easily. Non Fossil energy mix will increase from 19% in 2017 to 44% by 2050, by 2032 half of all passenger vehicle sales will be Electric (EVs) and Britain will ban the sale of new petrol and diesel cars and vans from 2030.

“Despite the wide economic slowdown due to COVID-19 in 2020, the average reduction in global greenhouse gas emissions did not exceed 7%. This should be seen as a wakeup call to both public and private sectors as to the severity of our global emissions situation and how we have to reinvent our economy to be able to save a green future not only for our children but more so for our generation.” According to Dr. Raed Bkayrat, Clean Energy Thought Leader & Senior Energy Strategist at The Clean Energy Business Council (CEBC).

These exponential digital technologies are unlocking new possibilities in the power sector, changing the boundaries and dynamics of the industry and helping to optimize renewables assets.

The futuristic concept of driving your electric car to your solar-powered home, plugging it in to charge and enjoying the flexibility provided by the oversized battery parked in the driveway is already here. Car manufacturers are leveraging their technical expertise and investments directly into new ventures in the energy sector, embarking on vehicle-to-grid pilots with a range of utilities and renewable energy providers. Car manufacturers are not only focused on energy storage, but rather looking at the whole ecosystem of home energy solutions to support a customer’s transition to an electric vehicle.

Sustainable transport can only become a reality once enough clean energy is generated to charge millions of EVs, and for that to happen the world’s mobility and energy systems need to merge into one ecosystem. As a result, the entire energy ecosystem is evolving rapidly. This is the integrated future. “You’ve got an electric car, a Powerwall and a Solar Roof. It’s pretty straightforward, really,” Tesla founder Elon Musk. 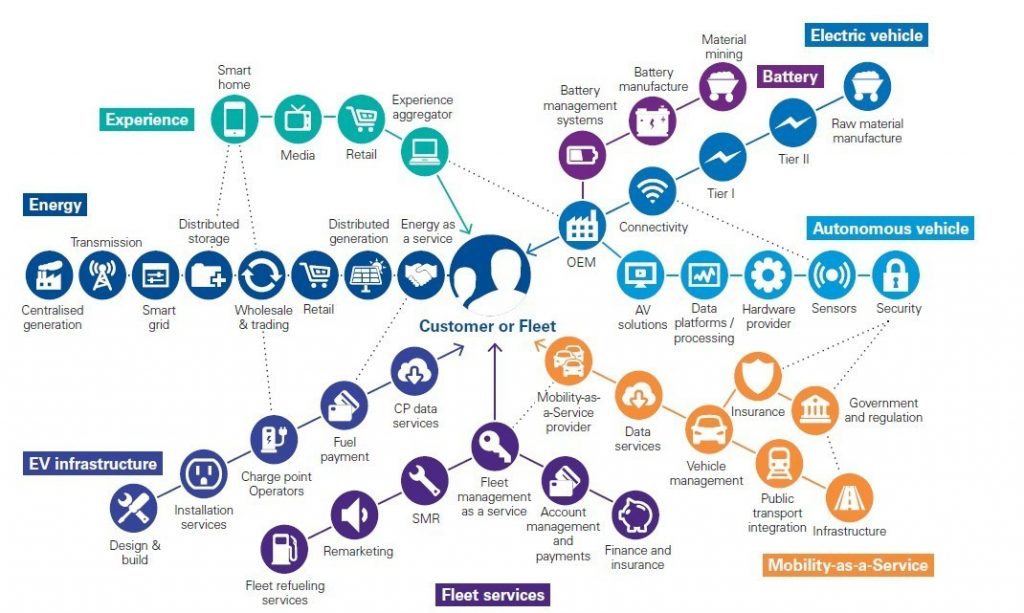 The Group Renault presented two new concrete solutions for energy management: The Advanced Battery Storage project in France and Germany and the SmartHubs project in the UK. One aim of Group Renault is to manage the gap between electricity consumption and production in order to increase the share of renewable energy in the energy mix and maintain the balance between supply and demand on the electricity grid by integrating different energy sources with intermittent production capacities.

The stationary energy storage gives a second life to the electric vehicle battery. When an EV battery no longer meets the demands of automotive use, it can (before being recycled) be repurposed for large-scale electricity storage. This is a less restrictive and demanding role in terms of energy density and available power. “With a battery, we have much more than a device for mobility. Once the battery’s useful life as an automotive component is over, its residual value is still very high, and it can be used for other applications that are less rigorous, like stationary energy storage. For us it’s the logical next step,” explains Dr. Christophe Dudezert, Program Manager for Energy Services at Group Renault, and in charge of developing and rolling out the Advanced Battery Storage project in France and Germany. 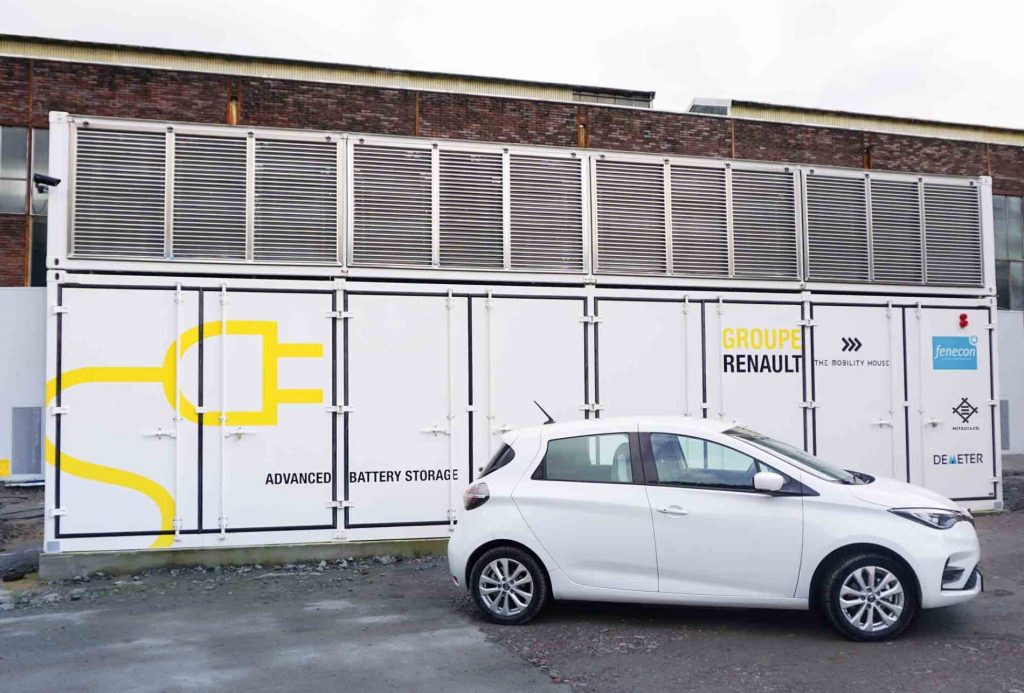 With all above, the cars of the future will be more efficient – electric powered and have less environmental impact, with no transmission, no exhaust system, no lubricating or extensive cooling systems and, if wheel motors are introduced, separate braking systems could eventually disappear too. Future of Mobility will involve vehicle to infrastructure communication and optimization.

One of the largest energy Internet of Things (IoT) platform in the world: Envision’s EnOS™ system manages 100GW of energy assets globally, equalling about the same of the UK’s entire generating capacity. Envision Energy is one of the biggest renewable energy developers and energy digitalization technology providers in China. Through 50 million sensors, it connects supply, demand and storage of sustainable energy, which feeds into the energy IoT. It is an open-source platform and therefore it is possible for its applications to span industry and infrastructure, from wind power and solar PV systems, to energy storage batteries, smart grids, smart buildings and intelligent electrical terminals. It also covers electric vehicles and charging networks.

If all electric vehicles are charging at the same time, the system is likely to be unable to handle such a large energy usage. The solution which Envision is working on is turning the driver of the car from a consumer into a “prosumer”, who can store and sell energy back to the grid. Having this synergy powered by EnOS™ means the car is intelligent within its environment and the wider energy ecosystem. Using connectivity and big data, EnOS™ creates a seamless efficiency between energy assets to balance supply and demand, capturing energy lost in the current fragmented system.

Any discussions about sustainability, renewable energy or energy intelligence initiatives cannot happen without collaboration efforts between the regulators, city planners, citizens, the corporate world and other stakeholders.

The UAE has been at the forefront of this energy transition as a promising market for renewable energy products and services as the country laid out its UAE Energy Strategy 2050, powered by its youth and the seamless collaboration between its public and private sectors.

The idea is to decarbonize industries by using renewable sources for power generation and driving renewables growth through tech investment. The country established the Abu Dhabi Future Energy Company, Masdar, and the region’s first carbon-neutral zero waste city, Masdar City, in 2006. Over the past 15 years, Masdar has pioneered the development of innovative and sustainable solutions that mitigate the impact of climate change and provide access to clean energy. Its renewable energy capacity in the UAE is set to increase fourfold by 2025, reaching 9 gigawatts. Not just that, UAE has gone even further by establishing the world’s largest solar power plant in the Al Dhafra region of Abu Dhabi that will be fully operational by 2022. 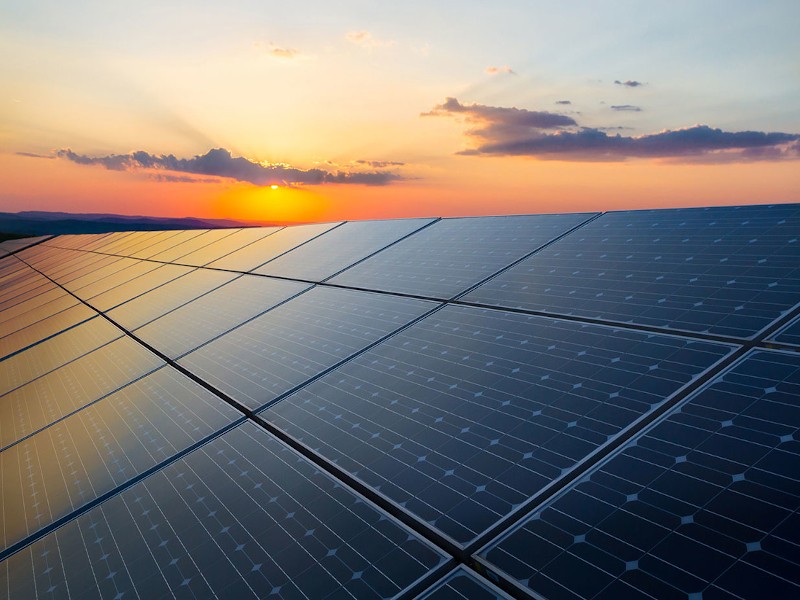 The Dubai Supreme Council of Energy has also increased procurement targets of electric and hybrid vehicles at government organizations to 20% in 2025 and 30% in 2030. There are also many other organizations and entities in the UAE that have being at the forefront of this energy transaction.

“The energy transition has already started and is happening all around us extremely quickly. The energy transition impacts all areas of our daily lives from our homes, transport, how we heat/cool our homes/offices, how we produce food and how we spend our spare time. The UAE is at the forefront of this energy transition as are the car manufacturers themselves who are using the change to electric vehicles as a way to introduce other energy transition measures into our society”, according to Iwan Walters, Partner at Eversheds Sutherland & a member of Clean Energy Business Council (CEBC) Board of Directors.

The UAE government has been rallying its citizens and population to join hands with them with campaigns like #MyEnergyMyResponsibility. The campaign is a joint effort between multiple government entities led by The Dubai Supreme Council of Energy and managed by TAQATI to bring the Dubai Government’s energy efficiency campaigns under one umbrella and provide a unified voice and consistent messages to target audiences on energy efficiency

The time to act is NOW!

Companies that incorporate sustainability in their business models will differentiate themselves with their stakeholders, customers, policymakers, employees, community and shareholders and instil confidence that they can navigate this global energy transformation.

These are exciting times for organizations to work collectively in carbon neutrality, clean energy and decarbonization through platforms such as The Clean Energy Business Council (CEBC), in charting out a cleaner & sustainable future for our generation in the region.

Let’s all act now for a cleaner and sustainable future!

How and where can cities accelerate innovation as an economic development strategy? In recent decades, many urban leaders attempted to answer this question through investments […]